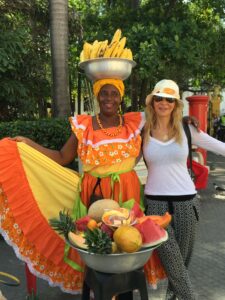 Despite its violent history, Colombia is a beautiful South American country full of tropical landscapes and happy people living in the coastal region, the countryside and the interior. The touristic and historic cities of Bogotá, Cartagena and Medellin are brimming with culture, innovation and energy. Colombia is known for valuable emeralds, rich coffee, beautiful woman, salsa dancing and the rise and fall of the world’s most infamous drug lord Pablo Escobar. Yet, I was amazed at the abundant varieties of local fruits grown and the vast amounts of traditional foods influenced by the climate, terrain and indigenous people. With ten days of family travel time in December, we decided to spend time in and around Cartagena, Playa Blanca, Islas de Rosario and Medellin. My family loved every moment of our Colombian adventures both on land and in the sea–but you do need to speak Spanish in order to travel with ease.

Here are interesting facts about Colombia:

• It’s the only country in South America that has a coastline on both the Pacific Ocean and the Caribbean Sea.
• You can enjoy warm weather year-round because of its proximity to the equator.
• Colombia has the most bird species in the world.
• Besides coffee, Colombia exports cut flowers, emeralds, leather goods, oil, coal and bananas.
• Colombian territory encompasses a large part of the Amazon rainforest and varying altitudes up and down the Andes Mountains with a tropical climate of heavy rainfall and fertile land, which allows for agriculturally biodiversity.
• There is a universal health insurance system that insures 80 percent of the population.
• There are nonstop flights from New York to Cartagena (5 hours) and nonstop flights from Miami to Cartagena (3 hours). Avianca now offers nonstop flights from Heathrow to Bogotá (about 11 hours).
• Colombia has one time zone and it’s the same as Eastern Standard Time in the U.S.; hence there are no issues with jetlag if you live on the east coast of the U.S. It is five hours behind London.
• Medellin, the second largest city in Colombia with an eternal spring-like temperature was once the world’s most dangerous city, but it’s now considered one of the most innovative cities. Basques rather than Spaniards colonized it.
• Bogotá, the capital and largest city has the most unpredictable weather compared to the other major cities of Colombia.
• The Islas de Rosario, islands off of Cartagena are a national park on the Colombian Caribbean coast. It’s worthwhile staying over one to two nights to experience the island life and enjoy the Caribbean lobster. 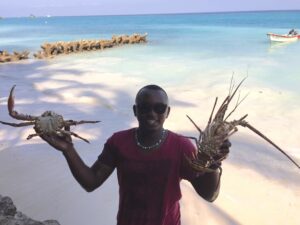 Getting back to food, most families eat meals that reflect both Spanish and indigenous traditions. Unlike in Spain, breakfast seems to be an important meal and includes, fresh juice, coffee or hot chocolate, fresh fruit, eggs and arepas (An arepa is similar to a tortilla). Fruit juices are made in a blender with water (and sometimes a little bit of sugar) and then poured through a strainer to strain the seeds out. Bottled, pressed or pasteurized juices are unpopular. In the countryside where physical energy is needed for work, lunch is the main meal, but in urban areas, dinner is the main meal. Inland, meat including pork, beef, blood sausage (meat mixed with blood), cow intestines and eggs are always on the menu. On the coast, the emphasis is on seafood. 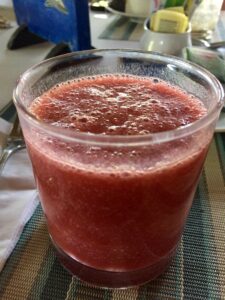 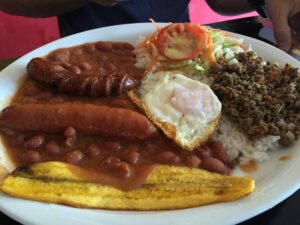 A few of my favorite Colombian dishes are coconut rice and patacones. Patacones are plantains mashed into thick pancakes that are deep fried in vegetable oil until golden brown. I hardly ever eat fried foods, but these are delicious! The rich-tasting Caribbean lobsters are plentiful and relatively inexpensive. Coconut rice pudding, a traditional dessert, is out of this world. I also loved the freshness of the cow cheeses like quesito, which is an ingredient in many traditional breads like pan-de-bono, made with corn flour, cassava starch (also known as yuca), quesito and eggs. 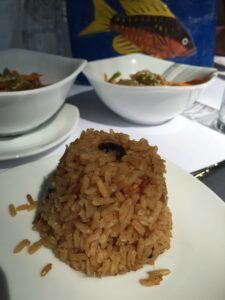 • There are so many exotic fruits including gooseberries, dragonfruit, mangostino, pitaya, anona, guanabana, passionfruit, papaya, sapote, guava, lulo, noni and granadilla. With so many types of fruits, even the locals don’t know the names of all of them. 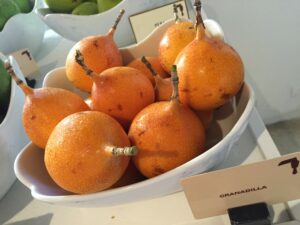 • Wheat is not a staple, yet yuca (or cassava) and corn take center stage when it comes to complex carbohydrates in the diet. Tapioca starch is made from cassava.
• Fresh tropical fruit and juice vendors line the streets, especially on the Caribbean coasts.
• Street food is a big part of Colombian culture including empanadas (cornmeal dough stuffed with meat and fried), arepas (grilled cornmeal or yuca pancake), salpicón (fresh fruit and soda water cocktail), obleas (sweet wafer sandwiches), coco frito (fried coconut), and carimañolas (yuca fritters stuffed with meat or cheese).
• Arepa is the “bread” staple of the diet–and always served at breakfast. It’s a cross between a pancake and a tortilla, made from corn or yuca flour and stuffed with fresh cheese or eggs. Arepas are to Colombia like tortillas are to Mexico or baguettes are to France. 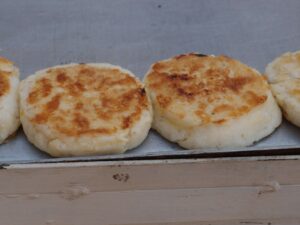 • Huevos pericos or scrambled eggs, a popular breakfast food, are made with tomatoes and scallions.
• Aguardiente is the official alcohol-spirit and national drink of Colombia. It means “fiery water” and is a distillation of sugar cane molasses, anise essential oils, and water that tastes similar to pastis, sambuca, and anisette.
• Ajiaco, a thick chicken soup associated with Bogotá, is made with three types of potato, corn, capers, cream, avocado and a special herb called guasca.
• Although bread is a staple, most of the Colombian breads are made with yuca or corn flour, making them gluten-free.

Pan de yuca is a traditional Colombian bread made with yuca flour and cheese. It’s best eaten fresh out of the oven and can be served anytime of the day with a cup of coffee or hot chocolate. 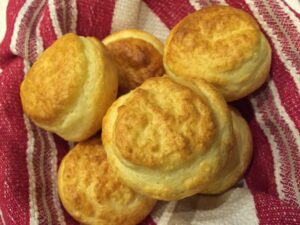 Ingredients (use organic when available):

Preheat oven to 425 degrees Fahrenheit (about 220 Celsius). Spray a 12-cup muffin tray with non-stick cooking spray and set aside. In a large mixing bowl, using your (clean) hands, gently combine all ingredients until well blended but do not over mix! Divide into 12 equal portions and roll each into a ball. Place in muffin cups and bake for about 10 to 12 minutes or until golden on top. Serve warm. Serves 12. 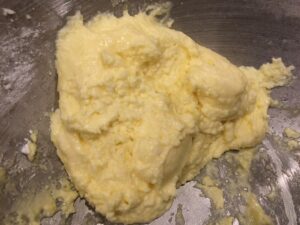 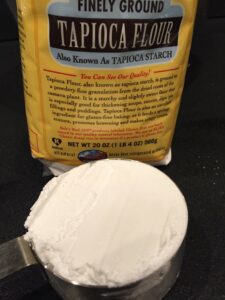 Pick up a copy of Layne’s book: Beyond The Mediterranean Diet for a practical approach to eating right with 50 simple, delicious and healthful recipes!