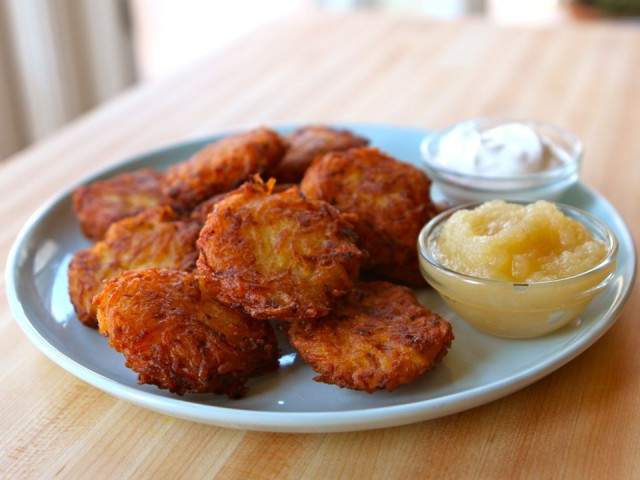 Latkes also known as potato pancakes are classic Hanukkah food. Traditionally made with potatoes, onion and matzo, latkes symbolize the miracle of Hanukkah because they are typically fried in oil. This recipe calls for gluten-free flour to replace the matzo and the latkes are baked instead of fried. Baking (instead of frying) preserves nutrients and cuts back on fat and calories.

Ingredients (use organic when available):

Using a box grater or a food processor fitted with a shredding blade, coarsely grate the potatoes. Press the grated potatoes between towels, to extract the moisture. In a large bowl, combine the grated potatoes with the onion, flour, salt, pepper, eggs, and the olive oil.

In French, Hanukkah is Hanouka or la Fête des Lumières (Festival of Lights)

For more healthy, nutritious and delicious recipes, check out my book: Beyond The Mediterranean Diet: European Secrets Of The Super-Healthy. It’s on sale at BarnesandNoble.com and makes a beautiful holiday tabletop gift!