Inside Sicily-Kitchen and Diet Secrets

Sicily is intriguing as it conjures up notions of the Mafioso culture so famously exaggerated in American movies. As I flew into Catania from Milano, I had images of crazy drivers with musical accents wearing wife-beaters (sleeveless underwear) in the heat of the summer.

Yet the reality of Sicily is very different than these stereotypes. Religious festivals, street fairs, rolling food carts and encounters with herds of goats and sheep are common daily occurrences as are teeny bikinis and speedos on the island’s beaches. Sicilians use their hands, head, and shoulders for gestures. And they deeply cherish grandma’s (nonna’s) hand-made macaroni hoping their wives will continue the tradition.

Sicily is the largest island in the Mediterranean and is known as the land of fertility because of its agricultural richness and productive fisheries. Its multi-cultural influences include the Greeks, Romans, Byzantines, Saracens, Spaniards, French and Normans, which add to the island’s beauty, food culture, and architecture. During the time of the Greeks, olives and grapes were the most important food crops. Later, Sicily became the wheat granary of the Roman Empire. Today, Sicily is the garden of Europe with specialty fruits and vegetables including blood oranges, tangerines, chestnuts, lemons, artichokes, tomatoes, table grapes, wild fennel, stick-long zucchini, eggplant, wild asparagus, fava beans, pistachios and the list goes on.

The two major cities are Palermo on the west coast and Catania on the east coast. There are smaller cities and villages inland and along the coast, each unique in their own way. I chose to stay at the Belmond Grand Hotel Timeo, located in front of a Greek theatre, situated in the village of Taormina. Taormina is a jewel of a town, perched on a cliff overlooking the Ionian Sea between Messina and Catania and close to Mount Etna and its surrounding vineyards, orchards, beekeepers and wild chestnut trees.

Mount Etna, Europe’s largest active volcano, is visible high above the eastern coast of Catania and continues to enrich the island’s soil with black ash from its ongoing eruptions (although short-term impacts can be negative to livestock). This soil offers optimal conditions to grow Sicily’s mouth-watering produce responsible for the robust flavors of traditional Sicilian cuisine. In the spring you can ski the mountain and swim at the beach on the same day. Mount Etna’s beginnings are seen on the “Cyclops Riviera” where the mythical stories of the Greek Odysseus (known as Ulysses in Roman mythology) battling the fierce one-eyed monster Cyclops and the six-headed sea monster Scylla, bring you back in time to the epic journey in Mediterranean history.

Wild chestnut trees surround the base of Mount Etna and Sicilians forage and share chestnuts during the fall harvest season. Chestnuts are rich in minerals like potassium, magnesium and calcium and vitamin C. Although historically, chestnuts were viewed as peasant food, today they are a delicacy. On the lower slopes of Mount Etna, is the Hundred Horse Chestnut Tree (Castagno dei Cento Cavalli), known to be the oldest tree in Sicily and perhaps the oldest in Europe.

Besides the beauty of the landscape, it’s the passion of the people–proud to be both Sicilian and Italian–that make this island so special. The Sicilians are generous and communicative, connected to their land, sea, arts and history–and most importantly to each other. Sacred is not only homemade semolina macaroni and nonna’s recipes, but the sharing of a meal followed by a good cup of coffee.

As discussed in my book Beyond The Mediterranean Diet: European Secrets Of The Super-Healthy, Italians begin a meal with a starter (primo), which in Sicily is almost always pasta. The main course (secondo) is fish with salad. Seafood is plentiful and very local! Swordfish (pesce spada) line-caught from the Strait of Messina is always on the menu and often you will see a small truck pull up to a restaurant to deliver a whole fish that is still fighting!

Fresh swordfish in the kitchen of a Taormina restaurant

The red shrimp, also from the Strait of Messina, are sweet and eaten raw. Sardines, red mullet and calamari are staples. As you go inland and up into the mountains, meats like donkey, beef, horse, lamb, goat, rabbit and chicken are popular. A typical meal ends with fruit or dessert (dolce) and coffee. Local wine and Prosecco, Italy’s famed (lower-calorie) sparkling wine are prized in Sicily. Don’t leave without trying the local wine Nero d’Avola!

Red shrimp served raw at a seaside restaurant in Capomulini

One of the highlights of my visit to Mount Etna was a lunch fit for a King at elegant Ristorante Veneziano, a second-generation family-run restaurant located in the medieval town of Randazzo. We were served local specialties–foraged porcinis were featured in many of the dishes–with pasta, in soup and carpaccio-style with arugula. For the meat eaters at the table there was black pig from Nebrodi, minced donkey meat and braised chicken. Other dishes included local sheep and cow cheese, wild asparagus (sparacogne), battered zucchini flowers, sundried tomatoes in EVOO, couscous with breadcrumbs, caponata and a fresh loaf of Italian bread. The cost of the meal was 90 euros for four persons and the hospitality and service were five-star!

In Sicily one could easily explore traditional Sicilian cuisine and it’s modernization because modern Sicilian cooking does not diverge much from its roots. Local ingredients are always used and it’s taboo to tamper with recipes that are passed down from one generation to the next. The early Arab settlers spiced up the cuisine with citrus and sweets. Their legacy is cassata, one of the world’s first cheesecakes filled with ricotta cream and adorned with almond paste and candied fruit. Marzipan (marzipane), a paste of almonds–made from Sicily’s almond crops–sugar and egg whites are shaped into peaches, oranges and prickly pears. Fresh bread is made daily with semolina flour, and usually topped with sesame seeds.

The town of Modica is famous for authentic chocolate making using only cocoa beans (and sometimes local carob beans) and sugar–no emulsifiers, artificial flavors or additives. First the cocoa beans are toasted and ground with a stone called a metate. The ground beans are warmed and sugar is added. The mix never goes above 40 degrees centigrade (or 104 degrees Fahrenheit) so the sugar doesn’t melt and remains granular. The chocolate is then transferred into shaped molds and left to set. This ancient method of cold-worked chocolate preserves more nutrients and flavor than modern chocolate-making methods. The method dates back to the 15th and 16th centuries, which gives us more reason to eat chocolate the way it was meant to be eaten–dark–and to stop tampering with old ways!

Here are more of the foods you must try In Sicily:

ARANCINI are balls of creamy risotto rice traditionally filled with tomato sauce, or meat, cheese, peas or a combination of these. Arancini are coated with breadcrumbs and deep-fried. They are in the shape of a cone or an orange. Arancia means little orange in Italian.

PISTACCHIO DI BRONTE referred to as green gold or pistachios grown in the town of Bronte, located at the western foot of Mount Etna were brought by the Arab conquerors in the 9th century. Sicilians use pistachios in many recipes including gelato, granita, pastries and pesto. Don’t leave Sicily without trying pasta made with pistachio pesto.

CANNOLI is the plural of cannolo, the crispy shell pastry stuffed with ricotta cream and sometimes mixed with chocolate pieces, which is the iconic Sicilian pastry said to have originated from Palermo. It undoubtedly crumbles into a big mess when you take a bite of it.

GRANITA E BRIOCHE is the standard Sicilian breakfast made with Italy’s standard breakfast roll called a brioche, sandwiched with granita, a semi-frozen dessert made with almond milk (latte de mandola), coffee or fruit and sugar. There is nowhere else in the world that makes a granita like Sicily.

PASTA ALLA NORMA consists of chunks of eggplant tossed with a basic tomato sauce and pasta, then garnished with grated ricotta salata.

CAPONATA is the Italian version of French ratatouille–a mixture of eggplants, onions, tomato, olives, pine nuts, and extra-virgin olive oil. It can be served cold or at room temperature. It may have originated from Spain.

SPAGHETTI ALLO SCOGLIO is spaghetti made with a variety of crustaceans and shellfish depending upon what’s available from the fishmonger. It’s served during festive occasions. Don’t miss the small, sweet and ridged Veraci clams from Trapani.

Pasta with seafood at Il Porticciolo restaurant in Capomulini

For recipes and no-gimmick diet advice based on the food culture from the three healthiest countries in Europe (including Italy) read my book: Beyond The Mediterranean Diet, European Secrets Of The Super-Healthy.

Layne at a Vineyard on the north side of Mount Etna, Sicily 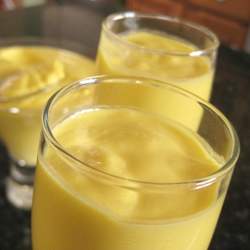