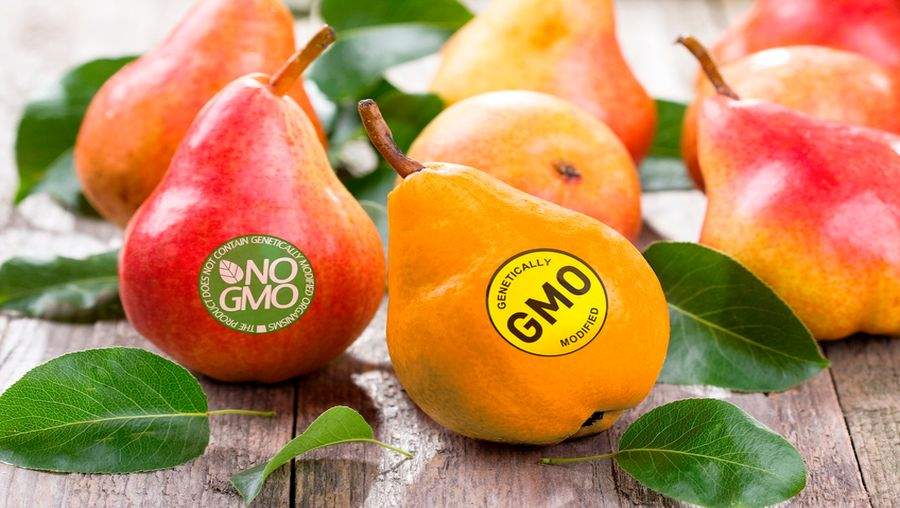 Whether or not food containing genetically modified organisms (GMOs) should be labeled is a point of contention amongst the dietitian community in the United States. Some of us believe science has proven GMOs are safe and that the technology results in agricultural advancement. Others are anti-GMO and believe that GMO research is being pushed by Monsanto (now a part of Bayer), the primary corporate sponsor behind the technology. Their view is that Monsanto is locking farmers into using its proprietary seeds to maximize profits at the expense of food quality and the environment.

A genetically modified organism has a genome that has been altered through genetic engineering by turning off an existing gene or adding a gene from another source – to create a new, desirable trait. Currently there are 10 commercial crops being grown in the U.S that are genetically modified: soybeans, corn (field and sweet), canola, cotton, alfalfa, sugar beets, summer squash, papaya, apples and potatoes. The U.S. Food and Drug Administration (FDA) has approved a salmon variant as the first genetically modified commercially available food animal. Relatively few countries grow genetically modified (GM) crops, with most of the global area being in the U.S, Argentina, Brazil and Canada. China and India grow mainly GM cotton, not food crops.

In the U.S. and Canada, GMOs are legal and require no labeling. It’s a different story in other parts of the world. In 64 countries including Russia, China, Brazil, Australia, Turkey, South Africa, Japan and all member nations of the European Union, it is mandatory to label genetically modified foods. Nineteen out of twenty-eight EU members, including Italy, have opted out of growing GMO crops within all or part of their territories. Russia, Zimbabwe and sub-Saharan African countries except South Africa prohibit the cultivation of GMO food crops.

According to my award winning book: Beyond The Mediterranean Diet: European Secrets Of The Super-Healthy, Italy is the birthplace of the Slow Food Movement which began in 1986 to defend regional traditions, good food, gastronomic pleasure and a slow pace of life. The organization started on the Spanish Steps in Rome as a demonstration against McDonald’s. The movement has evolved to embrace a comprehensive approach to food that recognizes the strong connections between plate, planet, people, politics and culture. Practices include maintaining old ways of agriculture. A recent headline this month (April 2017) reads “Bomb attack damages Monsanto research center in Italy.” According to the news, it was a protest against genetically modified organisms. One of the bombs damaged the area where most of the experimental seeds were stored. The attacker spray-painted a wall with “Bayer criminal marriage. No GMO.” Bayer, the German pharmaceutical giant, merged with Monsanto in 2016. Officials at the research center say that the staff does not work with GMOs and focuses on agricultural research and the improvement of traditional corn varieties. Although the center was significantly damaged, many of the seeds had already been planted in fields and new seeds from South America were stored elsewhere.

In addition to Italy at 13 percent, Spain (18 percent), France (12 percent) and Germany (10 percent), together make up 53 percent of the total EU-organic farmland. By definition, certified organic foods are not genetically modified, even in the U.S. and Canada. Meanwhile, there is a loophole, because European countries (including Italy) import over 30 million tons per year of corn and soy-based animal feeds for its livestock industry, and the vast majority of these feed grains are genetically modified.

The people of Italy and its government are committed to supporting small-scale agriculture, organic farming and biodiversity. However there is pressure elsewhere to allow GMOs in the door. Eight GMO crops currently await EU approval and one genetically modified variety of corn has been allowed to be commercially grown. In the U.S., the cat is out of the bag. Genetically modified seeds are used to plant more than 90 percent of corn, soybeans, and cotton grown in our country. Unless Americans are purchasing USDA certified organic foods, genetically modified foods are likely to find their way into most meals and snacks.

So why do we need genetically modified (GM) seeds?

Why are so many people against genetically modified foods?

In my view: There is the argument that people are resistant to change and technological advancements due to fear and that is the reason for this divide. However, there is something to be said for preserving old ways of agriculture and culture. These traditions bring meaning and substance to life and can be passed down from generation to generation. No research is needed and it’s proven to stand the test of time!

Registered dietitians, chefs, health professionals and friends are invited to experience a first-class, hands-on, authentic culinary and cultural journey through the bio-diverse region of Puglia, Italy this fall. Partake in daily life and old ways activities like pasta making in Bari, cheese making in Alberbello, wine making in Brindisi, cooking in Gallipoli, organic farm living in Fasano, DOP bread-making in Altamura and so much more!

Curated by Layne Lieberman, RD, an award winning registered dietitian and author of Beyond The Mediterranean Diet: European Secrets Of The Super-Healthy. Receive 30 approved CEUs from the Academy of Nutrition and Dietetics.

From: Stacia and Kristof Nordin
Subject: Dietitians and GMOs

My wife, Stacia Nordin (Registered Dietitian and past-President of the American Overseas Dietetics Association (AODA)), and I have been working on issues of sustainable food and nutrition security in Malawi, Africa for the past two decades. We manage a farm which grows over 200 highly-nutritious foods using non-GMO, organic, and low-input agroecological systems. We were recently very disheartened by ‘Today’s Dietitian’ decision to publish a 17-page ‘advertorial’ sponsored by Monsanto in an effort to sway the opinion of nutritionists and dietitians in favor of GMOs. We wrote the following response to refute many of the misleading claims that we need genetic engineering to ‘feed the world’ and ‘improve nutrition’. You may be interested in giving this article a read:
http://www.neverendingfood.org/achieving-food-and-nutrition-securitywithout-monsanto/ 4 years ago
BlogIn The NewsCulinary Travel

Stay Slim While Eating Focaccia, Pasta And Cheese — Like The Italians...